About 36kr
I discover this new blog -that have launch maybe 3-4 months ago- via tech local friend who recommended to me. The blog translate or review tech news (mostly from Silicon Valley) into Chinese. There are different sections of the site and the aim is to help promote startups and eventually give them a chance to connect with investor.
I heard they even have something that seems to me quite similar to AngelList: any startup can send them a description of their service and if 36kr judge interesting enough, they will send the pitch in a mailing list of angel investors. Method very uncommon in China where guanxi is all what matter.
The organization is young, entirely composed of volunteers. The creator Liu Chengcheng is still a student. But what is sure, is they are very dynamic, try different things, organizing offline events in Beijing, Shanghai and Guangzhou and they become very quickly pretty well known.
There is for sure a huge need to fulfill here in China in terms of :
– promoting startups, driving media attention
– giving them a platform to introduce their services and connect with potential interested parties.
About the event Open Day
It is a monthly free event, every 3rd Saturday,
6 pm-7:30 pm Introduction of startups on stage (last even 6 teams presented)
7:30 pm – 9:30 pm Networking
The event is hosted in a new coworking space (they call themself incubator, but it really just a cafe for entrepreneur) in ZhongGuanCun, Garage Cafe (????????????). It is a great place, very spacious, good and affordable drinks, very nice atmosphere, a lots of book in the back. Located one block away from the startup incubator Innovation Works.
I arrived at the event at 7:30pm, just when the pitch finished 😦 There was quite a lot of people, ~ 80 I would say. People were forming lots a small group discussing very lively, the networking was going great.
I met 2 friends there so we end up chatting together but still meet a few interesting people. The quality of the audience was very good, all entrepreneur or investor I would say. Many mature entrepreneurs (with several year experience behind them) and 90% local – I didnt see any foreigners but I suspect that a few people were ABC.
One of iWeekend mentors, Bill Zhou, CEO of a LBS platform called ifindu (?????????) was there to introduce their service. Another iWeekend organizer, Parker was also there and we end up have a long chat about leadership and business ideas in China.
I even find myself sitting at the same table of one of Sina co-founder, a very captivating and quiet man with perfect English (maybe he lived a long part of his life in the States?).    It seems quite incredible when we realize that Sina is one of the most important Chinese internet company very popular for its portal, blogs and now famous Weibo (often referred to as the Chinese Twitter).
We had a long discussion on the difference in leadership and company structures in China and US. Companies tends to mimic the state organization.
In the US, the power of the state is balanced between the executive, legislative and judicial branches. This distribution of power prevent one institution to have too much power and do what they want. It is valued and seen as safer, so company have the same structure: CEO, board of directors and the shareholders. The CEO is not the majority shareholder and any big discussion in company direction have to be approved by the BoD and shareholders. CEO strive for long-term survival of the company, shareholder for short term increase of the share value.
In China, where all power (executive, legislative and judicial) are concentrated in the communist party, the concentration of power allows decision to be taken faster as interests are overlapping. As well, in most Chinese company, the CEO is also the main shareholders (or even in Korean, Japanese conglomerates, the majority shareholders are family!). Which mean the CEO work for his own interest and rather for short term gain that long term strategic move. One illustration is Renren early IPO which was not done for a need to raise more cash but just as an easy exit and short term profit.
In this internet bubble environment here in Chine and very fierce competition that the top internet companies are fighting (BAT – Baidu Alibaba and Tencent, but also Sina, Sohu, Renren…), the Chinese structure is an advantage as it allow them to move fast. But Sina (and Alibaba) has a American kind of structure, which right now can be penalizing but will hopefully pay in the long term.
With Parker, we discussed further all kind of business ideas, he always have a lot of opinions and it is always fruitful to bounce ideas with him. He also explained me the difficuties Chinese startups had to find exposure. 36 kr is a new great initiatives that play on this need, but there are still a lot of room for more initiatives. 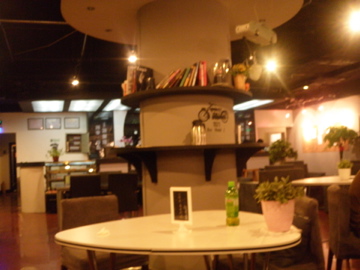 I work in tech since 2008, moved from Reunion island to Paris, Beijing, San Francisco and ended up in Berlin in 2014.
View all posts by Carole (code name 烤肉) →
This entry was posted in Being an entrepreneur, China, Events, Tech. Bookmark the permalink.