Why do you like helping others? The Superman syndrome

Why do YOU do it?

– You reached a stage in life where you know how to be happy and understand that happiness is the only thing that when shared, it multiplied (I read that somewhere^^). In order to sustain your own happiness in society you better invest in making more people around you happy. You create a virtuous cycle in order to protect your own happiness.

– You are unhappy with yourself, unable to save yourself. Probably you don???t want to face your own problem. Helping others give you a sense of mission and a quick fix to the emptiness of your life. It is a good way to boost your self-esteem and it can help you reach the next step.

I did both scenario in life. To tell the truth I have always had wave of sadness since I was very little and never understand why or how to fight it. It grew bigger as I grew up, wave of sadness and melancholy turned into month of chronic depression I had (have?) every year.

So ever since I was a child I had this will to save the world. It is hard to explain but I will try. >From that early age I called it the Superman syndrome (you basically want to be superman!).

I remember once I was about 14 y old taking the public bus and one guy was drunk and/or high and verbally harassing a teenager. I was terrified but wanted to do something. Then an older big black woman seating in the back of the bus started yelling at him, stuff like ???leave him alone or I am going to kick your ass???. The drunk guy first turned his aggressiveness towards her and started threating her, but it didn???t stop her or scared her at all. She kept yelling to leave people alone and to get out. Which he eventually did, swearing at her. The bus was half full but no-one else did or say anything. I thought she was awesome and that some day I will be like her.

When in college I tried to save someone once but also learn, you cannot save people who are not ready to save themselves.

I was living in an international student residence in Paris when one day my neighbour friend called me to tell me a Chinese girl needed my help. I didn't know her but because I was organizing these Chinese French language exchange meeting my friend thought I might be the best person to talk to her. She was about my age, 22 or something, came to France to study, failed her exams, her visa expired but she stayed illegally in France because it was too much losing face for her parents who spent so much money to send her to France. She couldn???t enrol to any university as she was here illegally and had recently been going from Student residence to other student residence to ask help from student who would be willing to host her. So I offered to host her for 3 days. She told me her story that she tried working in restaurant but it didn't feat her, then she met this man who offered to help her and let her live with him. Then he abused her sexually but when she went to the police they didn't took her seriously so she left and here she was. It was a very disturbing story for a na??ve student like me at the time so I tried hard to help her, contacting female shelter, the embassy to see if they would pay for her flight back, went to the post office to check how much it would cost to send her stuff back to China ??? and offered to pay!!- until we find a solution for her own flight. But quickly I realize, she had no intention to go back to China, and also didn't wanted to do any work of any kind. She claimed she wanted to be a radio host and be taken care of by??? I don't know..people. So after she refused to go to the female shelter or to contact the embassy I kicked her out and she looked at me crying and saying ???if I leave your place I will have to stay at this other boy???s place and I will have to have sex with him???. I just told her ???Good luck???. She actually tricked at least 2 other of my friends into helping her for about 1 month until they realized she was more using them then anything else. Today I have no idea where she ended up but watched the Chinese movie Pingguo.??She probably either died either met a nice guy who really did take care of her. For me it was a good lesson.

With time I realized I am not the only one to have the Superman Syndrome. Guys do it when they date super needy girls (it works also the other way around). One friend once told me about his ex-girlfriend that she was like ???a lost soul that life had been unfair to and this led to a sense of responsibility for protecting her and making her happier than before she had met me???.

And he is not the only I know who ever felt this way.

The truth is you can only save yourself and it is everyone responsibility to save themselves. At best you can only be a guiding light or a motivation for them to initiative their own rescue.

If there is one thing I learn form watching Baywatch (yes I did watch Baywatch when I was young and I did learn something). There was this episode where David Hasselhoff, dive into the water to save a drowning woman and ends up under a bridge in the water, surrounded with pillars. The water is pretty wild and he remember in his lifeguard training that in that case you are suppose to use the rescue as a shield to protect you when you are projected by the waves towards the pillar. But he thinks it is an horrible manner so when he get projected he took the shock and fall unconscious for a few seconds. Long enough for him to drop the woman and lost her forever. Then he has to deal with the guilt of letting her down by not being able to protect himself. You have to be strong, alive and conscious before being able to save others. If helping others make you weak, well you are probably not saving anyone.

So how to save yourself?

I listen to a few NLP classes??(neuro-linguistic programming, practice close to hypnosis you can use on yourself to build a positive environment in your life. Also inspire the book The Secret ??? that I haven???t read but heard more bad than good feedbacks about it).Anyway, in this class, the trainer explains how amazingly efficient the human mind can be in self destruction. For example you are stressed for one reason, so you start smoking more and more, so your health get worse, so you get more tired and more sensitive to stress ect??? But the good news is that it works also the other way, you receive a good news, are in a good mood, so be nice to people who are kind back at you, it creates new opportunities and more occasion to be happy.

So I did it. Helping others to help me. I did it to boost my self esteem when I just arrived in China and enrolled in a 9-weeks program to teach English to migrant Children. I had to wake up at 7 am and take the bus for 1 hour every Saturday morning but it totally worth it. These migrant kids live in terrible conditions (terrible to me, it seems fine to them) and are so unaware of it and they are all excited when they see you arriving, welcome you with a smile, super happy to go to class on a Saturday morning (as their parents usually work they would otherwise stay alone at home I guess). I had a wonderful time and kept being unrolled in another program that required less commitment. It is called Open Saturday when you can come any Saturday you like to keep an eye on the kids teach them whatever you want: sport, music, drawing, English??? if you are interested in doing similar thing I would recommend you Compassion for Migrant Children, active NGO in Beijing and other cities. Their training program for volunteer is really well made and they make sure you have all the support you need, meet with other great volunteers…

And today I help others because I feel strong enough and wish to create a virtuous cycle around me. I am enrolled in iWeekend,??a non-profit that help entrepreneurs realize their dream. The audience is not underprivileged kids but it is as important because it is helping people who are or were unhappy in their job to find a way out. Helping them be their own boss. And create job for themselves and others.

We all need an ego boost from time to time, but don???t trick yourself into trying to save other. Just give them support and focus on helping yourself. Only this way are you really helping building a better a world. People who really want to get out of their situation will pro-actively come to learn from you. Others might not be ready yet but it is their life and you have to respect that.?? 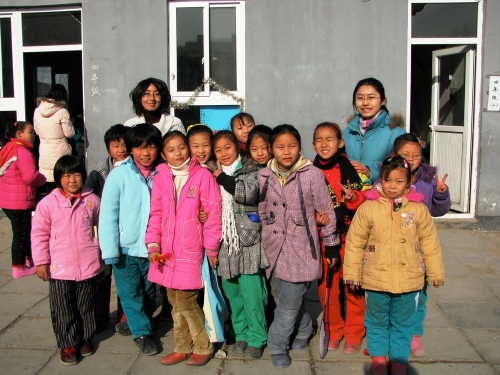 I work in tech since 2008, moved from Reunion island to Paris, Beijing, San Francisco and ended up in Berlin in 2014.
View all posts by Carole (code name 烤肉) →
This entry was posted in Being a woman, Being Children and Parent, Personal Experience, Values and tagged life. Bookmark the permalink.